About Sky's the Limit Web Marketing

Sky's the Limit Web Marketing is owned and operated by Larry Gardner, a self taught webmaster and Search Engine Optimization (SEO) Specialist. Larry has been developing, designing and marketing small business websites since he started his company in 2003.

Sky's the Limit Web Marketing specializes in small business websites whether you need a new website or have a web site that isn't working well enough for you. We can take your existing website and improve its performance and traffic to much higher levels. As a small business web specialist we are able to offer you flexibility regarding your internet marketing needs and your budget.

Located in Niagara Falls, Ontario, we currently have clients in Vancouver, Japan, Surrey BC, Arizona and California as well as Niagara Falls. Sky's the Limit Web Marketing was started to address the problem of having a beautiful website that wasn't getting any traffic. Let MrWebsite inspect your website.

The Sky’s the Limit for Ridgeway business owner 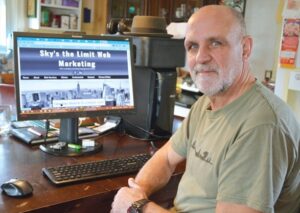 Larry Gardner knows a thing or two about surfing — the web, that is.

Gardner is the face behind Sky’s the Limit Web Marketing, a business he runs out of his Ridgeway home. Since 2003, he has been helping his clients drive more traffic to their sites through effective Google search rankings.

Larry Gardner is the face behind Sky's the Limit Web Marketing, a business that he runs out of his Ridgeway home. Since 2003, he has been helping his clients drive more traffic to their websites through effective Google search results.

It all helps to beef up the bottom line for businesses, he said.

"I do pretty well in terms of site rankings which improve overall performance of the website" Gardner said.

His client base is both local and international.

"I work with small business in general. I have clients in Vancouver, Surrey, Niagara Falls and Japan" Gardner said.

He is largely self-taught. He began to look into how he could generate traffic to amputee.ca, a website he had created. Gardner had lost part of his left leg as the result of a car accident in 1974. He was a passenger on a motorcycle being driven by a friend when it was struck by an oncoming vehicle. The accident resulted in Gardner's left leg being amputated above the knee.

"It pretty much soared to No. 1 and stayed there for about 10 years" Gardner said.

The Internet was still relatively young in those days of the early 2000s so there were not a lot of places for Gardner to learn from. While he worked at The University of British Columbia, he had the opportunity to take ongoing courses in various technologies. He also studied computer programming at Sheridan College.

But none of that involved search engine optimization, which is the science and art of getting ranked on the first page of Google search results.

"When I started in 2003, there really was no such thing as an SEO Consultant."

He makes use of various online tools, including Google Search Console, Google Analytics and Google My Business to help improve website performance for his clients.

When it comes to SEO, a lot of sites lag behind.

"Most sites I look at have lots of room for improvement." Gardner said." They have incorrect titles that don't include their best keyword. It all starts with keyword research."

Gardner said regards each website he works on as something akin to getting a new puppy. "I feed it, water it, walk it, and train it to do what its supposed to do.

Gardner, meanwhile, also managed to snag a catchy domain name - www.mrwebsite.ca - for his business. He can be reached by phone at 289-968-0927 or via email to larry@mrwebsite.ca. There is also a contact form on his website.

Reprinted by permission of Niagara This Week